Answers to today’s questions at f.riday.com

1. What are your strengths as a writer?

I can write description and introspection until the cows come home. This is both a blessing and a weakness because it’s so easy to procrastinate by writing that instead of actions & progressing plot.

2. What are your challenges as a writer?

I find dialogue extremely hard to write. It always feels unnatural to me while I write and then later on too, when I read it.

3. When did you last write creatively?

4. Which writers did you especially enjoy when you were a student?

Dean R. Koontz and not a specific writer, but those 1980s and early/mid-90s Star Trek novels as a whole.

I write print mostly, only regularly sign my name in cursive.

My cursive looks adolescent, like a child wrote it – awful, except for my name which looks a little bit better because it’s the thing I’ve written in cursive the last 35 years or so for hundreds of time.

I’m now quite satisfied with my print currently… two years ago I changed how I print the letter “a” – I used to write it with the typewriter font “a” (that’s how we were taught to print in school in the early 80s) but now I write it like in this picture:

This new font changed entirely how my print writing looks – it used to look disjointed and not attractive, but the new font I’m using makes everything look more regular, neater and rounded. I like it very much. In the last several weeks I’ve noticed that I’ve started to print other letters a little rounder as well, and I think that makes my printing look neater compared to the old way where some of my letter leaned a little bit backwards while others leaned a tiny bit forward. With this newer font, I somehow print more even.

We are a creative writing group for all those that love to write and love to help others write. Our central theme is creative writing – original fic, fan fiction, poetry, creative non-fiction, screen-writing, and much, much more. Challenges will primarily be individual with a mixture of team challenges and games.

Phase 3 has just begun – see our FAQ & Rules to learn more! If you decide to join, be sure to mention I referred you. 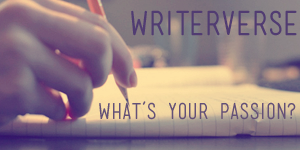 I’ve imported all my writings I wanted to keep to WordPress and deleted the efiction site. You can access them by the Writings link in the menu.

I feel bad about not writing, or rather writing so little. Writing isn’t easy for me, it takes a long time and more energy and so much more creativity than say, making wallpapers, or avatars. I think a thing contributing to this is that English isn’t my native language, and I try to be too careful to say what I mean to say perfectly the first time – instead of just getting it down, and rewriting and tweaking it later. So it takes a lot of energy. For the last couple of years, ever since I started at my last job in February 2007, I haven’t had that energy, or if I have had the energy haven’t had the creativity. At first the job was so bad and stressfull, and two months after that ended all that health problems/stuff I’ve been writing in my Livejournal started, and is still going on as I write this. I fell out of writing habit.

In case you’ve been wondering why I can keep capping as normal with all this health stuff going on – capping demands very little; uploading is by far the worst part, and even that doesn’t need much effrot. And weeding out the bad caps, even though I hate doing it because it’s boring, is so routine, there’s no thinking involved. So that’s why I’ve been managing capping normally, and wallpapers/avatars almost normally.

Now that things are looking a little better, I hope I can get back to that habit – I miss writing, and I’m writing in my head all the time, every day. It’d be great if there were a device that could read my thoughts and put them on paper but there’s not, so just have to do it hard way…

It doesn’t help that I dread writing Todd – not so much because I don’t think I can write him, but because I haven’t written a canon character other than Ardeth Bay in more than 7 years, I think. I don’t remember dreading writing Ardeth even the first time around. I think Ardeth and The Mummy universe have become my comfort zone, and now I need to write start writing the part with Todd, I’m dreading getting out of that comfort zone. I had no trouble writing in SGA when it was just on OC – granted, there was some direction problems because I didn’t know why she was there and why Todd would want her, but with AKVeronica60′s help, I believe I got that sorted out. So it just remains to write Todd… and I don’t. There’s quite clear in my head, and there’s been times when I’m not tired and feel like I can write… and I don’t. I procrastinate, do anything but write. And I hate that!

Any suggestions as to what to do to brake this rut?

I’d love to try a WC – explanation here – but that’s complicated by my living in the “wrong” time zone for pretty much any fandom real-time online activity. I’m in Finland which makes my time zone GMT+2, and I’m pretty much sleeping when most people I know online are up and vice versa. If you live in a time zone closer to mine, and would like to try a WC out, please e-mail me or leave a reply here.

ASOIAF/House of the Dragon Screencaps Poll

So the new ASOIAF tv series House of the Dragon is only a few weeks away (August 21), and knowing myself I’ll want to cap it because of the pretty, and because I’m still not over obsessing about the Game Of Thrones world.

So, is there any interest in me capping House of the Dragon?? These would be either in 1080p (HD) or 2160p (4K/UHD), depending on quality of the sources I can find, and hosted in a Coppermine gallery. Filing in the poll below will help me decide whether to create a gallery or not.

Vote in the poll here!

All copyright is to their respective owners.

We use cookies on our website to give you the most relevant experience by remembering your preferences and repeat visits. By clicking “Accept All”, you consent to the use of ALL the cookies. However, you may visit "Cookie Settings" to provide a controlled consent.
Cookie SettingsAccept All
Manage consent

This website uses cookies to improve your experience while you navigate through the website. Out of these, the cookies that are categorized as necessary are stored on your browser as they are essential for the working of basic functionalities of the website. We also use third-party cookies that help us analyze and understand how you use this website. These cookies will be stored in your browser only with your consent. You also have the option to opt-out of these cookies. But opting out of some of these cookies may affect your browsing experience.
Necessary Always Enabled
Necessary cookies are absolutely essential for the website to function properly. These cookies ensure basic functionalities and security features of the website, anonymously.
Functional
Functional cookies help to perform certain functionalities like sharing the content of the website on social media platforms, collect feedbacks, and other third-party features.
Performance
Performance cookies are used to understand and analyze the key performance indexes of the website which helps in delivering a better user experience for the visitors.
Analytics
Analytical cookies are used to understand how visitors interact with the website. These cookies help provide information on metrics the number of visitors, bounce rate, traffic source, etc.
Advertisement
Advertisement cookies are used to provide visitors with relevant ads and marketing campaigns. These cookies track visitors across websites and collect information to provide customized ads.
Others
Other uncategorized cookies are those that are being analyzed and have not been classified into a category as yet.
SAVE & ACCEPT